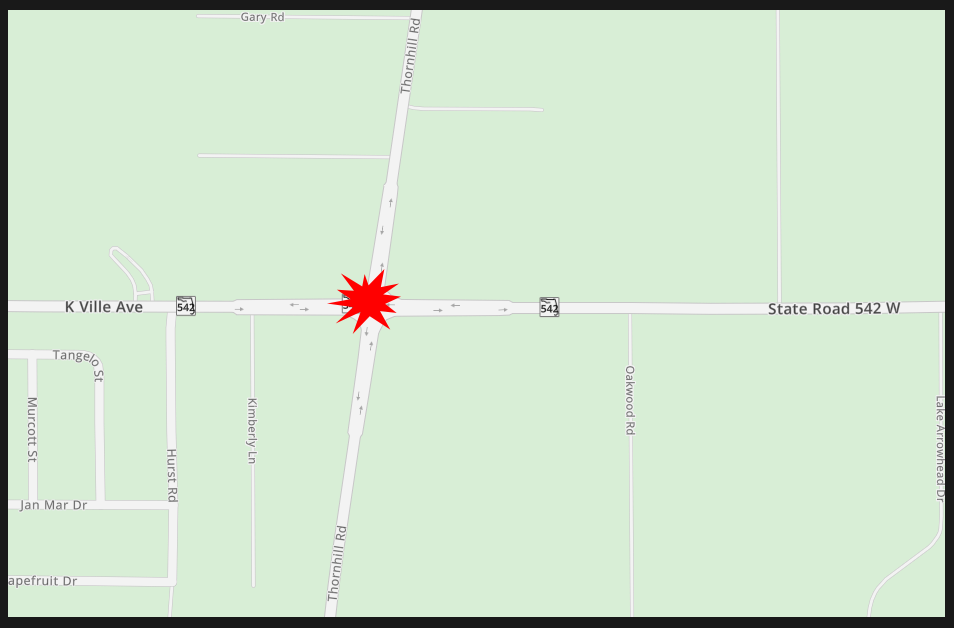 Hit & Run crash leaves man with life-threatening injuries; search is on for suspect

Detectives from the Polk County Sheriff’s Office are investigating a hit & run crash that occurred on K-Ville Avenue (County Road 542) at Thornhill Road in the Winter Haven area, which left a motorcyclist with life-threatening injuries.

The victim, a 67-year old Auburndale man, sustained numerous broken bones and head trauma, and was taken to a local hospital.

"There's a man fighting for his life in the hospital because a coward hit him and then fled the scene without contacting emergency services. That's a felony. If you think you may have seen or heard anything at all, please contact us - your tip might be the key piece of information we need to find the suspect(s) responsible for this crime.  The victim and his family are in our prayers." - Grady Judd, Sheriff

Based on evidence and statements, the preliminary investigation determined that that the victim had been driving his motorcycle west on K-Ville Avenue while another vehicle was heading eastbound. At the intersection with Thornhill Road, the suspect turned left (north) and crashed into the victim.

The suspect’s vehicle continued to push the motorcycle across the pavement for several feet before coming to a stop. At that time, the suspect put the vehicle in reverse to separate the vehicles.

The suspect then fled from the scene, continuing northbound on Thornhill.

The PCSO helicopter was used to look for the suspect vehicle, but was unable to locate it.

The suspect vehicle is described as being a maroon pick-up truck with a lift kit (which raises the truck’s height). The front left area of the truck may have damage caused from the crash.

If anyone has any information regarding this hit and run investigation, please contact the Polk County Sheriff’s Office at 863-298-6200. Tips can also be made anonymously to Heartland Crime Stoppers Florida at 1-800-226-TIPS (8477), and if the tips leads to an arrest, the tipster could be eligible for a reward.